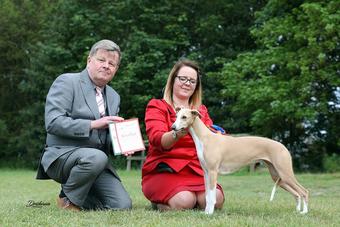 My name is Jarmo Vuorinen and I’m living in a small village called Tarvasjoki, close to Turku, Finland.

I was interested about dogs at early -70’s when I got my first own dog, which was an Afghan Hound. Soon I noticed that I’m not a person who likes grooming dogs, so this was my first and last dog with longer coat.

I got my first Pharaoh Hound 1977. I have bred 13 litters with lot of Champions and I was TOP breeder in the breed many years in late -80’s and -90’s but nowadays I don’t have that breed anymore. I’m still active in our club, Finnish Pharaoh Hound and Ibizan Hound Club, which foundation member and honorary President I am.

Got my first Whippet at 1989. It was Ch Nevedith Xray from Great Britain. Over the years I have imported also another Whippet from GB, one from France, one from Sweden and four dogs from Canada.

I have bred 13 litters, but at the moment I have stopped breeding. I still have three Whippets at home, but I’m not showing them.

I’m very much looking forward to coming back to Latvia and judging your beautiful dogs.