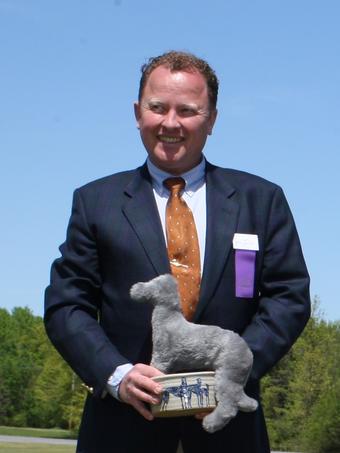 Björn Fritz became involved in Sighthounds in the early 1980th .During the years 1986 and 1987 he took the opportunity to live in the UK, where he stayed at Dagmar Kenis – Pordham's place (Solstrand Irish Wolfhounds and Greyhounds) and some longer time he spent also at Miss Nobel's home Ardkinglas in Scotland.

In 1990 the first Fritzens Deerhound litter was born, half American, half Scottish.

The Deerhounds at Björn and his partner Klaus Krüger's place, still carry that old blood in their pedigrees.

Their aim is to keep the Deerhounds unchanged and not to 'create' something new.

The same energy they put in their Border Terriers, which they have also been breeding for the same length of time.

Fritzens Deerhounds have been exported to most European countries and the USA.

During the last three decades they have also kept a couple of Borzois, Greyhounds and Salukis. Right now they share their home in a hilly area near Cologne, with a Dachshund, a Greyhound, their Deerhounds and Border Terriers.

Björn had his first judging appointment in 2002.

He is an approved FCI group 10 judge and is also allowed to judge the Mediterranean breeds at international shows.

He has judged almost all Deerhound club shows in Europe, twice in the UK, the US, the Azawakh club show in France and Saluki club shows in the US and Bahrain.

When Björn judges he wants to have a relaxed atmosphere in the ring, a crowd of sportswomen and -men, and is looking for dogs close to their breed-standard with an easy and effortless movement.